RTI reveal: More than 10 Indian workers died every day in Gulf countries in the last six years; 117 deaths for every US$ 117 remitted 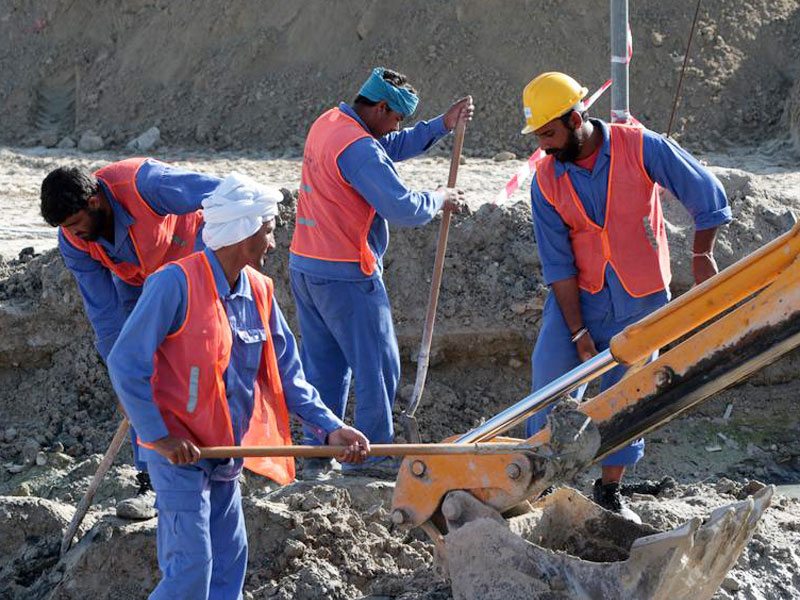 According to data tabled in Parliament in April 2018, (see attachment 10) there are 87.76 lakh (8.77 million) Indians in six Gulf countries: Bahrain, Kuwait, Oman, Qatar, Saudi Arabia and the United Arab Emirates (UAE). While replying to an Unstarred Question (#6091) raised in the Lok Sabha, the Union Minister of State for External Affairs said that during the first half of this financial year alone (between April-September 2018), blue-collared Indian workers in these countries had remitted USD 33.47 Billion back home.

Not much is known about the human cost of such earnings which swell up the country’s forex reserves quietly. My recent RTI intervention and research of proceedings in Parliament has revealed that between 2012 and mid-2018 more than 24,570 Indian Workers died in these Gulf countries. This works out to an average of more than 10 deaths per day. For every US$ 1 Billion they remitted to India during the same period there were at least 117 deaths of Indian Workers in Gulf countries.

Please read further for the details of the RTI intervention and data analysis.

In August 2018, I submitted a request for information under The Right to Information Act, 2005 (RTI Act) to the Union Ministry of External Affairs (MEA) through the Central Government’s RTI Online filing facility seeking the following information (see page 1 of attachment 1):

"1) The year-wise list of the names, age, sex, and occupation of Indian workers who died in the countries of Bahrain, Oman, Qatar, Quwait, Saudi Arabia and the United Arab Emirates between 01 January, 2012 till date; and

2) The cause of death as mentioned in the death certificates of every deceased Indian worker referred to at para 1 above for the same period."

The Central Public Information Officer (CPIO) promptly transferred the RTI application to the CPIOs of the Indian Embassies situated in the six Gulf countries (see page 3 of attachment 1). It appears that the MEA does not maintain data about the deaths of Indian Workers unless queries are raised in Parliament.

Both the CPIO and the First Appellate Authority of the Indian Embassy in UAE refused to provide even this data citing Section 8(1)(j) of the RTI Act which exempts the disclosure of personal information which may cause unwarranted invasion of privacy of the individual or where the disclosure has no relationship to any public activity or interest (attachment 7). Despite showing the good practice of proactive information disclosure adopted by the Indian Embassy in Kuwait, the Embassy in UAE continues to refuse even basic data.

The other Indian Embassies have refused details regarding the deaths of Indian Workers sought in the RTI application by either citing Section 8(1)(j) of the RTI Act or by claiming that the information was held in multiple files in disaggregate form. They are striving to adopt the lowest common denominator instead of following the sterling example of the Indian Mission in Kuwait.

In order to fill up the gaps in the data (between 2012-2013, which the Indian Embassy in Kuwait did not display) and the data which UAE refused to disclose, I researched the websites of the Lok Sabha (Lower House) and the Rajya Sabha (Upper House) in Parliament and found some data. A preliminary analysis of these collated datasets indicates the following trends (the data sets are in the form of tables in attachment 8 and graphs in attachment 9):

1) Available data indicates that at least 24,570 Indian workers died in the six Gulf countries between 2012 and mid-2018. This number could increase if the complete figures for Kuwait and UAE are made available publicly. This amounts to more than 10 deaths per day during this period (see Table 1 in the attachment 8 and graphs 1 and 2 in attachment 9);

2) At 10,416, the most number of deaths occurred in Saudi Arabia during this period while Bahrain accounted for the least number -- 1,317 deaths (see Table 1 in attachment 8 and graph 1 in attachment 9);

Comparing datasets of deaths with datasets relating to remittances

Most of the Indian diaspora is also a very important source of forex earnings for the country. The World Bank publishes estimates of remittances from every country sent to every other country on the globe in its annual Migration Reports. Although these figures are estimates only, they have received currency in official circles as the Central Government often reports from these figures when questions regarding remittances are raised in Parliament. However, while World Bank publishes data based on the calendar year, the Reserve Bank of India publishes weekly remittance data based on the financial year cycle (see Tables 3 and 4 in attachment 8). Nevertheless, country-wise data regarding remittances is not traceable on RBI’s website.

A comparative analysis of the data regarding remittances received from Indians working in Gulf countries with the datasets relating to death reveals the following preliminary results:

1) Indians working in Gulf countries accounted for more than half of the remittance that India received from all over the world between 2012-2017. While Indian received a total of US$ 410.33 billion in remittances from the world over, remittances from the Gulf countries accounted for US$ 209.07 Billion (see Tables 5 and 6 in attachment 8 and graph 8 in attachment 9);

4) Interestingly, while UAE was the source of the highest amount of remittances from Indian workers during 2012-2017 (US$ 72.3 Billion), it also had the lowest deaths per US$ Billion remitted to India (a little over 71 deaths). Conversely, Bahrain, which came at the bottom of the list in terms of total remittances during the same period (US$ 7.19 Billion only), stands at second place in terms of the number of deaths of Indian workers per US$ Billion remitted (a little over 183 deaths). In other words, every US$ Billion earned by Indian Workers remitted from Bahrain cost much more in terms of deaths than a similar amount remitted from UAE (see Table 7 in attachment 8 and graph 6 in attachment 9);

5) A comparison of the remittances data from Gulf countries with the remittances from the Indian diaspora in the advanced countries of the western world, namely, UK, USA and Canada shows some interesting trends. Indian workers in the UAE remitted US$ 72.3 Billion between 2012-2017 while remittances from Indians in the USA were only US$ 68.37 Billion during this period. Remittances from the UK at US$ 23 Billion and a mere US$ 17.3 Billion from Canada compare poorly with the remittances that Indian workers sent from Saudi Arabia, Qatar, Oman and Kuwait during the same period (See Tables 5 and 6 in attachment 8 and graphs 4 and 7 in attachment 9). However, the Indian diaspora in the developed world seems to wield more political influence in India than the Indian worker community eking out a living in Gulf countries. This phenomenon also needs a deeper examination from researchers and academics;

6) Further, remittance from Nepal to India (US$ 17.37 Billion) was only slightly lower than the remittance from Canada to India (US$ 17.39 Billion) between 2012-2017. While remittances from Singapore amounted to only US$ 5.5 Billion during this period, remittances from Bangladesh to India stood at US$ 4.7 Billion. Remittances from Pakistan and Sri Lanka individually during the same period were higher than the remittance received from Indian workers in Bahrain. Interestingly, remittance data from Pakistan to India is available only for the years 2013-2014 (US$ 9.46 Billion) (see Table 6 in attachment 8 and Graph 7 in attachment 9). The World Bank Migration Reports indicate that similar data was not made available by the authorities in Pakistan for other years covered by this study. Similarly, the Central Government was not able to provide data about the number of persons of Indian origin or NRIs in Pakistan in its reply tabled in the Lok Sabha in April 2018 (see attachment 10);

7) It appears that blue collared workers are contributing more to India’s forex kitty than the white-collared workers in the developed countries. However, as a proportion of the total forex reserves at the end of the calendar year, the share of the remittances seems to be declining in recent years. In 2012, remittances from Gulf countries were equal to 12.57% of the forex reserves (excluding gold and Special Drawing Rights) declared by RBI for the week ending December 29. In 2017, the remittances were only 9.97% of the year-end forex reserves declared by RBI; and

8) According to data tabled in Parliament by the Central Government, 7.75 lakh Indian workers were issued emigration clearances (ECR) in 2014, enabling them to work in the six Gulf countries. This number has since fallen, year after year. 7.6 lakh workers were issued ECR clearances in 2015, 5.07 lakh workers issued ECR in 2016. During the first 10 months of 2018 only, 3.46 lakh ECRs were issued by the Central Government. The number of ECRs seems to have halved since 2014. In its reply to an Unstarred Question raised in the Lok Sabha, the Government also listed a slew of measures put in place to provide safeguards for Indian Workers in Gulf countries. However none of these measures include any mention of steps taken to study the phenomenon of deaths of Indian Workers in Gulf countries. (see Table 10 in attachment 8 and attachments 10 and 11).

The above comparison is not an attempt to label the remittances from the Gulf as blood money. Instead the purpose of this comparative analysis is to highlight the shockingly large number of deaths of Indian workers in Gulf countries. This phenomenon requires urgent examination. It is hoped that the Central Government will start this exercise by making more information about deaths of Indian Workers in these countries public. There is an urgent need to commission experts to study the cause of deaths -- especially the large number of deaths labelled in Qatar as “natural deaths” and examine the conditions under which Indians work there and identify measures that will prevent avoidable deaths.

Meanwhile, I will file an appeal with the Central Information Commission to examine the good practice of the Indian Embassy in Kuwait and direct the other Embassies to emulate their standard of proactive information disclosure regarding the deaths of Indian Workers abroad.

Note: An article "Government takes steps to protect rights of migrant workers in Gulf nations" mentions that the government has acknowledged the inadequacy of data infrastructure about Gulf workers from India. This is a win for our efforts at highlighting the issue. Our consistent position on the inadequacy of data stands vindicated.