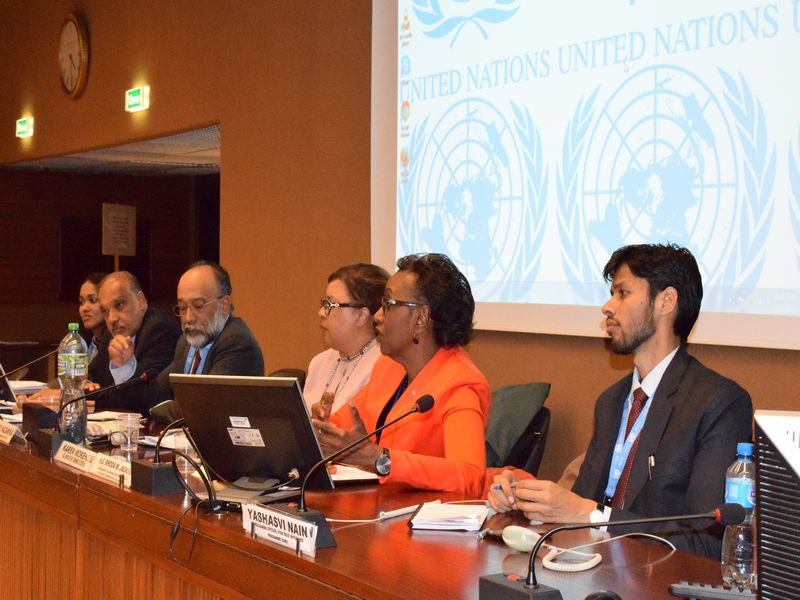 Leading Small States of the Commonwealth today called for a more inclusive approach to human rights in the UN Human Rights Council that reflected their concerns, development interests and priorities.

“Human right is about justice and inclusion,” said Ambassador J.R. Deep Ford of Guyana, who co-hosted the panel discussion, which was organized by Commonwealth Human Rights Initiative (CHRI). Other collaborators were the Permanent Mission of Singapore and the Federation International des legues desdroits de L’Homme (FIDH).

Mr. Ford and other ambassadors from the Bahamas and Singapore as well as Karen McKenzie, head of the human rights unit at the Commonwealth Secretariat, spoke at a side event in Geneva during the 36th session of the Human Rights Council (HRC). The CHRI event was titled, Small States at the HRC, Building Capacity, Strengthening Presence and Developing Outreach.

Nitya Menon, Singapore’s Deputy Permanent Representative in Geneva, spoke of the difficulties of small states in handling complex issues relating to UN processes, because of a shortage of staff or economic resources and the need to simplify and demystify these.

“We need collective combined inputs,” she added, saying that if small states were unrepresented at major programmes, the UN system and major donor countries “were missing important voices”.

Karen McKenzie of the Commonwealth Secretariat shared the organization’s efforts to build capacity among small states, showcased some success stories like the Bahamas which is contesting for a seat at the next HRC, but admitted that more was needed to be done, despite a funding crunch.

Ambassadors and senior diplomats from various UN missions participated including the New Zealand, United Kingdom, Bhutan, Germany, Australia, Canada, Kyrgyzstan, Belize, Malawi, Guinea Bissau, Singapore, joined by a range of civil society members and UN officials at the event. The discussion was aimed at raising awareness about under-representation of Small States at the HRC, and the need to build synergy amongst Commonwealth countries, the Commonwealth Secretariat and civil society to support Small States in building capacity.

In the interaction which followed, diplomats and civil society representatives urged for better coordination among larger countries, small states and Small Island Developing States to foster better understanding of their needs and their complex societies. There was a need for better engagement with CSOs to help develop a greater “quality of trust” as well as review of implementation of UN resolutions in their home countries.

CHRI Director, Mr Sanjoy Hazarika, who moderated the session, spoke of the need for better accountability processes as well as “bridging democratic deficits”.

The HRC was formed on founding principles of impartiality, non-selectivity and international cooperation by the General Assembly in 2006. However, existing practice of clean-slate elections, where regional groups propose only one candidate for each available seat, have undermined the diversity and the quality of the HRC’s membership. Small States face severe resource constraints and lack technical capacity to engage with the Council, which further hinders their participation. Strikingly, 12 out of 31 Commonwealth Small States do not have permanent missions in Geneva.

Of the 52 member states of the Commonwealth, 31 are Small States. While in the first decade of the HRC, 19 Commonwealth countries have served at the HRC, only four (Botswana, Namibia, Mauritius and Maldives) have been Small States. Since the institution of the Special Procedures was established, only six Commonwealth Small States – Jamaica, Fiji, Malta, Maldives, Mauritius and Namibia – have had one or more of their nationals appointed as Special Rapporteurs. Further, only four Small States – Botswana, Mauritius, Namibia and Maldives – have so far participated in the capacity of troika in the Universal Periodic Review (UPR) process.

Yashasvi Nain, Program Officer at CHRI’s Strategic Initiatives Program, argued that the inclusion of Small States would diversify the human rights discourse and ensure democratization of the Council. There was a need to contextualise and highlight the under-representation of the Commonwealth Small States within HRC.