Democracy Bewteen a Rock and a Hard Place 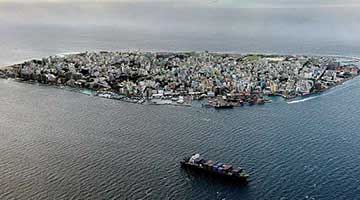 The signs are unmistakeable. Defensiveness edged with barely veiled annoyance underlies the responses of Maldivian ruling party officials as they respond to concerns regarding the Rule of Law in the Indian Ocean archipelago.

A sense of déjà vu.

There is a sense of déjà vu in the experience. The resistance brings back disquieting personal memories of life under the Rajapaksas in Sri Lanka. That same instability seething under a deceptive surface of normalcy is now evidenced in the Maldives.
As the country is gripped by political repression, troubled Maldivians cling to the idea that somehow, some day, things will change. In a charged conversation during a mission of the New Delhi-based Commonwealth Human Rights Initiative (CHRI) to Malé in November 2015, one lawyer remarked in a hushed aside: ‘We look at Sri Lanka’s example in dealing with its rulers and hope that we can do the same.’