Refugees and the Other ‘Invisibles’: Race and Discrimination in India 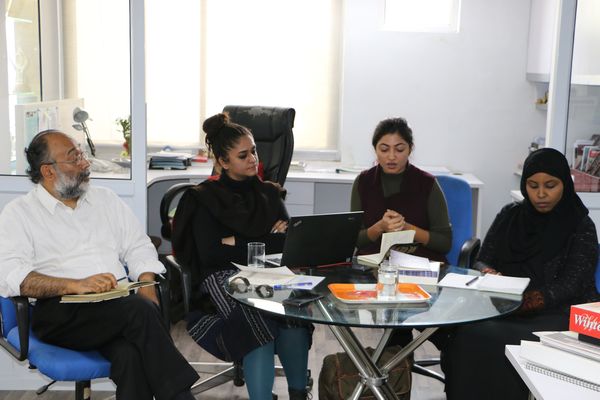 Second in a series of CHRI Brown Bag Lunches

New Delhi, February 02 -- The Commonwealth Human Rights Initiative (CHRI) hosted a special brown bag lunch, the second in its series this year, on Refugees and the Other ‘Invisibles’: Race and Discrimination in India with three young scholars and activists who spoke from perspectives of research, practice and experience.

Part of the discussion hinged on a presentation on 'The Horizon Is An Imaginary Line', a semi-fictional illustrated account of a young Somali woman’s experiences as a refugee in India. Co-authored by speakers Bani Gill (PhD Fellow at the Department of Cross-Cultural and Regional Studies, University of Copenhagen) and Ms. Radha Mahendru (Curator and Programs Manager at Khoj International Artists’ Association), the book is a unique collaborative effort drawn from ethnographic research and a series of storytelling workshops with Somali refugees in Delhi.

In an engaging interaction with CHRI staff, the authors reflected on the discrimination faced by African refugees in Delhi.

Responding to a query on the need for a strong refugee law in India, Ms. Gill underscored India’s ambiguous status within the global refugee regime. “There is no refugee law in India at present. However, I feel that ad-hoc implementation of existing laws creates problems and confusion. It is important to sensitise lawmakers and the general public on these issues through concerted efforts. There is also a need for a strong regional refugee law framework that provides clarity and ensures justice for victims,” she said.

“We came across multiple narratives and experiences of refugees in India, and developed these through a series of storytelling workshops. Through this graphic novel, the aim was to highlight what it means to be a refugee in India,” said Ms. Mahendru.

The third speaker, Ms. Fatima Hassan, a Somali refugee in India who was a key contributor to the book, added, “I came to India with my family 16 years ago to study, and became a refugee ten years ago when we could not return. I knew what being a refugee meant but to live the experience was a stirring experience. Since then, I had been wanting to work on issues related to refugees and working on this book was extremely gratifying.”

Mr. Sanjoy Hazarika, Director, CHRI, moderated the discussion, which is part of a series of brown bag lunches with scholars, professionals and others enabling them to speak on issues of their concern and interest and provide a discussion forum with CHRI staff.  An earlier speaker last month had come from Chatham House in London.