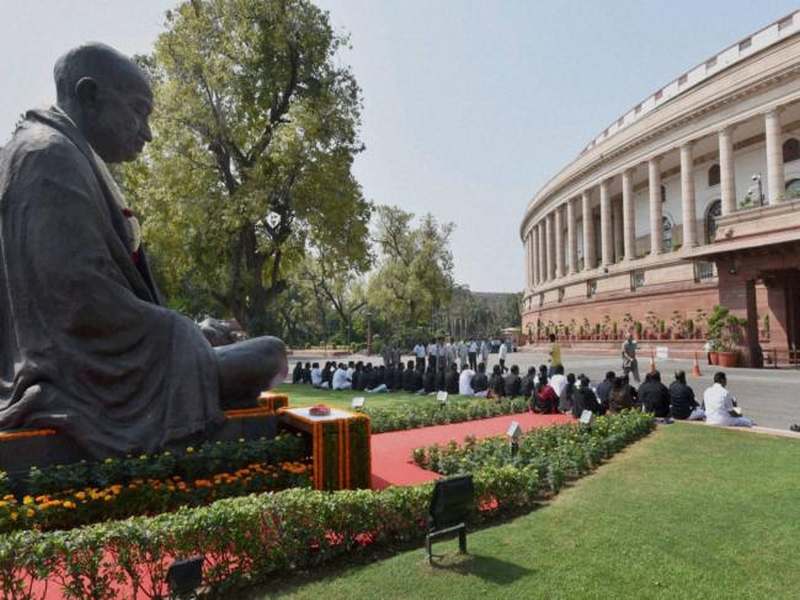 According to a recent news report published by a prominent national daily, some newly elected MLAs in West Bengal were being required by their leaders to sign an oath of allegiance to their political party. Whether this measure has been authorised by the party's apex leadership or is more of a localised show of fealty to the leadership remains to be proved. However, two RTI interventions made recently, with the Secretariats of the Lok Sabha and the Rajya Sabha shows that MPs never cast their vote in Parliament against the "whip" or the diktat of their respective political parties since May 2009 (until March 2016). The four RTI applications and responses received are attached.

Freedom of action in Parliament

However, the Tenth Schedule to the Constitution, popularly known as the anti-defection law, introduced by the 52nd constitutional amendment in 1985, makes voting or abstaining from voting, contrary to the directions issued by one's political party, a ground for disqualifying an MP from the membership of the House. This disqualification is however subject to an exception. If the MP has voted or abstained from voting against the party "whip" by obtaining prior permission from the competent authority and such authority has condoned such action or abstention, he or she will not attract disqualification. Other grounds for disqualification of an MP include defecting from the parent political party without resigning one's seat in the House. In all such matters the decision as to whether the MP attracts disqualification from the membership of the House will be made by the Speaker in the case of the Lok Sabha (Lower House) or the Chairperson in the case of the Rajya Sabha (Upper House). Both Houses have notified Rules for implementing this anti-defection law. Although the legal provisions state that the decision of the presiding officer will be final, such decisions are subject to judicial review on grounds of mala fide intent, amongst others.

Rule 3(6) of The Members of Lok Sabha (Disqualification on Grounds of Defection) Rules, 1985 provides for the procedure for enforcing the provision for MPs to cast a vote against their party's whip. This Rule reads as follows:

"(6) Where a member belonging to any political party votes or abstains from voting in the House contrary to any direction issued by such political party or by any person or authority authorised by it in this behalf, without obtaining, in either case, the prior permission of such political party, person or authority, the leader of the legislature party concerned or where such member is the leader, or as the case may be, the sole member of such legislature party, such member, shall, as soon as may be after the expiry of fifteen days from the date of such voting or abstention, and in any case within thirty days from the date of such voting or abstention, inform the Speaker as in Form II whether

such voting or abstention has or has not been condoned by such political party, person or authority.

Similarly Rule 3(5) of The Members of Rajya Sabha (Disqualification on Grounds of Defection) Rules, 1985 which applies to the MPs of the Rajya Sabha reads as follows:

No MP has crossed the party diktat since May 2009

The Secretariats (Sectts.) of the Houses of Parliament have confirmed in their reply to my RTIs that they have not received any intimation from any major political party, about condoning the action of their MPs voting or abstaining from voting against the party diktat during the last 7 years. I did not ask similar information for earlier periods as the Sectts. might have treated my request as being vexatious holding that I had asked for records that are more than 10 years old and they would have had to search for them long and hard (see 1st and 2nd attachments).

The RTI replies imply that MPs are willing to toe the party line always, rather than talk to the citizens whom they represent and then vote according to their considered advice even if it is against the party's diktat. Neither have these MPs voted or abstained from voting according to their conscience and against the party diktat. In many conferences, MPs lament the "restriction" on their freedom imposed by the Tenth Schedule of the Constitution that prevents them from going against the party "whip" on pain of disqualification. If they were to vote or abstain from voting against the party whip, they say they would be treated as defectors and consequently lose their seats. Cutting across party lines, four MPs expressed their helplessness in this manner at a conference organised in Delhi by a prominent parliament-watch organisation, a couple of months ago.

However, the MPs have almost never bothered to explain to the people why they have never exercised their right to vote according to the wishes of the people whom they represent or according to their conscience, despite being empowered by the Constitution and the 1985 House Rules to so do.

So the latest news about the alleged swearing of oaths of allegiance in a prominent political party comes as no surprise because the behaviour of most of the MPs in Parliament when it comes to voting on a law or any other motion tabled in the House (when a whip is issued) at least during the last 7 years has always been guided by loyalty to the party diktat and little else. The latest exercise of allegedly swearing allegiance on paper in West Bengal is only a small drama occurring outside the legislature which only confirms the long-held belief that once elected, politicians show greater loyalty to the party they represent instead of the people who elected them.

In my first round of RTI interventions I also asked for the documents that the political parties represented in either House of Parliament submitted to the respective presiding officers under the respective anti-defection Rules. The Rules of both Houses mentioned above, require all parliamentary parties to submit a list of their members in either House, the competent authorities with whom the presiding officers will communicate for the purpose of dealing with cases of defection and also copies of the parties' constitutions and their internal rules and regulations.

The Central Public Information Officer (CPIO) of the Rajya Sabha Sectt. pointed out that no such information had been submitted by the parliamentary parties since May 2014 (when the current Lok Sabha was constituted). The CPIO of the Lok Sabha Sectt. first invoked Section 7(9) of The Right to Information Act, 2005 (RTI Act) and suggested that I inspect the documents because they were voluminous. Later on he supplied copies of the covering letters sent by parliamentary parties which I found during the inspection (3rd attachment). The documents obtained from the Lok Sabha Sectt. indicate the following:

1) Only the BJP, Shiv Sena, YSR Congress, LJP, AIUDF, SAD, Apna Dal and JD(U) have indicated who the competent authority is in their parliamentary parties to communicate with the Speaker, Lok Sabha in relation to the anti-defection law. During the inspection, I could not locate the letters of the following political parties about who their authorities are to communicate with the Speaker for the purpose of the anti-defection Rules: Indian National Congress, TDP, TRS, CPI-M, JD(S), All India Trinamool Congress, AIADMK, Samajwadi Party, AAP, J&KPDP, RLSP, INLD, and JMM. I did not seek copies of the list of MPs and the party Constitutions as these are available online and it would have wasted the time and resources of the Lok Sabha Sectt.

2) Of the parliamentary parties that have more than 1 MP in the 16th Lok Sabha, I could not locate the replies of the following parliamentary parties sent to the Sectt. containing their list of MPs, authorities to communicate with Speaker for the the purpose of anti-defection Rules and a copy of the party Constitution: TDP, TRS, CPI-M, All India Trinamool Congress, AIADMK, DMK, SP, J&KPDP, RLSP, INLD and JMM. AAP has only sent a list of its MPs in the Lok Sabha but none of the other required details. The Sectt.'s officials told me that they send reminders regularly to the non-compliant political parties. However, as I had not asked for copies of such letters in my RTI application,  they did not show them to me.

These RTI interventions put a question mark on the freedom of MPs to act in Parliament against their party's diktat. They also reveal how several prominent political parties have not submitted information to the Lok Sabha Sectt. that they are legally required to provide under the anti-defection law despite repeated reminders. The reasons for this non-compliance are best known to the parliamentary parties themselves.

State Legislators are also empowered to vote against the party diktat

The anti-defection law contained in the Tenth Schedule applies to State Legislatures as well. I request readers to make use of RTI to find out whether MLAs have ever voted against the party diktat in the State Legislatures. As several State Legislatures do not even have official websites, it is not possible to find out without RTI interventions whether these Legislatures have even made Rules for implementing the anti-defection provisions of the Constitution. However citizens have the right to know how whether their elected representatives have ever made use of the exception to the anti-defection law to vote against the party's whip. Readers may use the template of the RTI application contained in the attachments with suitable adaptation for their interventions.

As the Tenth Schedule of the Constitution defines a "Legislature Party", all legislature parties become "authorities or bodies established under the Constitution". So in my humble opinion, by logical extension they become "public authorities" under the RTI Act. So readers in India might like to seek information from them directly.