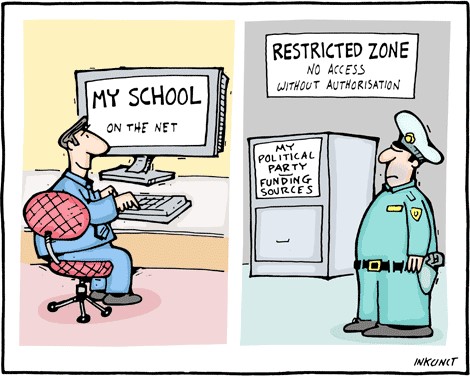 While presenting the budget in the Lok Sabha (Lower House of Parliament) yesterday, the Hon'ble Finance Minister made some announcements about the manner in which he sought to make donations to political parties more transparent. If the proposals to amend the relevant laws are approved by Parliament, from April 2017 onwards, donations in cash can be made up to Rs. 2,000 only by any person; payments of higher value will be permitted only through cheques or digital mode and donors will be able to buy 'electoral bonds' that will be sold through commercial banks under the regulations made by the Reserve Bank of India. Some commentators have hailed this as a major step forward while some of us have expressed skepticism about this initiative.

An analysis of what the Government is proposing and what it means for transparency of political party funding is given below for readers to understand better without having to trawl through the Finance Bill, 2017. In short, if the amendments are approved by Parliament, political party funding is likely to become largely opaque in future. Here is why this is a very real possibility.

What did the Union Finance Minister say?

The extract from the speech of the Hon'ble Finance Minister made in the Lok Sabha on the subject of transparency of electoral funding is reproduced word for word below:

164. India is the world’s largest democracy. Political parties are an essential ingredient of a multi-party Parliamentary democracy. Even 70 years after Independence, the country has not been able to evolve a transparent method of funding political parties which is vital to the system of free and fair elections. An attempt was made in the past by amending the provisions of the Representation of Peoples Act, the Companies Act and the Income Tax Act to incentivise donations by individuals, partnership firms, HUFs and companies to political parties. Both the donor and the donee were granted exemption from payment of tax if the accounts were transparently maintained and returns were filed with the competent authorities. Additionally, a list of donors who contributed more than `20,000/- to any party in cash or cheque is required to be maintained. The situation has only marginally improved since these provisions were brought into force. Political parties continue to receive most of their funds through anonymous donations which are shown in cash.

a) In accordance with the suggestion made by the Election Commission, the maximum amount of cash donation that a political party can receive will be `2000/- from one person.

b) Political parties will be entitled to receive donations by cheque or digital mode from their donors.

c) As an additional step, an amendment is being proposed to the Reserve Bank of India Act to enable the issuance of electoral bonds in accordance with a scheme that the Government of India would frame in this regard. Under this scheme, a donor could purchase bonds from authorised banks against cheque and digital payments only. They shall be redeemable only in the designated account of a registered political party. These bonds will be redeemable within the prescribed time limit from issuance of bond.

d) Every political party would have to file its return within the time prescribed in accordance with the provision of the Income-tax Act.

Needless to say that the existing exemption to the political parties from payment of income-tax would be available only subject to the fulfilment of these conditions. This reform will bring about greater transparency and accountability in political funding, while preventing future generation of black money." [emphasis supplied]

What amendments to which law are actually being proposed?

I. AMENDMENTS TO THE RESERVE BANK OF INDIA ACT, 1934

"(3) Notwithstanding anything contained in this section, the Central Government may authorise any scheduled bank to issue electoral bond.

Explanation.–– For the purposes of this sub-section, ‘’electoral bond’’ means a bond issued by any scheduled bank under the scheme as may be notified by the Central Government.’’. [emphasis supplied]

In other words, the RBI Act is sought to be amended to allow for the issuance of electoral bonds that individuals and companies can buy through commercial banks.

(B) the word “and” occurring at the end shall be omitted;

(iii) after clause (c), the following clause shall be inserted, namely:—

‘(d) no donation exceeding two thousand rupees is received by such political party otherwise than by an account payee cheque drawn on a bank or an account payee bank draft or use of electronic clearing system through a bank account or through electoral bond.

Explanation.––For the purposes of this proviso, “electoral bond” means a bond referred to in the Explanation to sub-section (3) of section 31 of the Reserve Bank of India Act, 1934.’;

(II) after the second proviso, the following proviso shall be inserted, namely:—

“Provided also that such political party furnishes a return of income for the previous year in accordance with the provisions of sub-section (4B) of section 139 on or before the due date under that section.”. [emphasis supplied]

In simpler terms, the IT Act is sought to be amended to exclude donations received by these political parties through "electoral bonds from being reported to the IT Department every year in order for them to continue to avail the exemption from paying income tax.

III. AMENDMENTS TO THE REPRESENTATION OF THE PEOPLE ACT, 1951

‘Provided that nothing contained in this sub-section shall apply to the contributions received by way of an electoral bond.

Explanation.––For the purposes of this sub-section, “electoral bond” means a bond referred to in the Explanation to sub-section (3) of section 31 of the Reserve Bank of India Act, 1934." [emphasis supplied]

In other words, the import of the amendments proposed to the RP Act, 1951 is that political parties will not be required to disclose the identity of individuals and companies who make donations through electoral bonds bought from the commercial banks.

Justification for these amendments provided in the Finance Bill, 2017

The Finance Bill contains the following justifications for amending these three laws:

Justification for amending the RBI Act:

"Clauses 133 and 134 of the Bill seek to amend section 31 of the Reserve Bank of India Act, 1934 relating to issue of demand bills and notes.

referred to in the proposed clause (d) of the first proviso to section 13A of the Income-tax Act.

It is also proposed to define the expression “electoral bond”.

This amendment is consequential in nature.

Justification for amending the IT Act:

"Clause 11 of the Bill seeks to amend section 13A of the Income-tax Act relating to special provision relating to incomes of political parties...

It is proposed to amend the said section so as to provide, inter alia, that political party shall be eligible for exemption of income-tax under section 13A if,—

electronic clearing system through a bank account or through electoral bond;

(ii) it furnishes a return of income for the previous year in accordance with the provisions of sub-section (4B) of section 139 on or before the due date as per section 139.

It is further proposed to provide that any contributions received by way of electoral bond shall be excluded from reporting as per clause (b) of said section.

It is also proposed to define the expression “electoral bond”.

These amendments will take effect from 1st April, 2018 and will, accordingly, apply in relation to the assessment year 2018-2019 and subsequent years." [see page 63 of the Finance Bill]

Justification for amending the RPA Act:

"Clauses 135 and 136 of the Bill seek to amend section 29C of the Representation of the People Act, 1951 relating to declaration of donation received by the political parties.

Sub-section (3) of section 29C of the Representation of the People Act, 1951, inter alia, provides that every political party shall furnish a report to the Election Commission with

It is proposed to provide that the contributions received by way of "electoral bond" shall be excluded from the scope of sub-section (3) of section 29C of the said Act. It is also

proposed to define the term "electoral bond" which is consequential in nature.

If approved by Parliament, the combined effect of the amendments to the RBI Act, the IT Act and the RP Act is likely to be as follows:

1) Many political parties are likely to strive to receive cash donations below Rs. 2,000 only. Thanks to Section 29C of the RP Act which applies to donations of Rs. 20,000 or above only, these will not be required to be reported to the IT Department or to the Election Commission of India.

2) As donations received through electoral bonds are exempt from being included in the annual reports of political parties to the IT Department or the Election Commission of India, these amounts will also not be reported.

3) Only such contributions received about Rs. 20,000 through cheques or digital mode of payment will be required to be reported to the IT Department and the Election Commission of India.

So the combined effect of the amendments is that political parties will be under no obligation to disclose any donation or contribution that they receive at all, unless it is made electronically or through cheques.

Keeping the Rajya Sabha out of the decision-making loop

The process through which these changes are proposed to be made are also hugely problematic. the Finance Bill is a Money Bill within the meaning of that term under Article 109 of the Constitution. Rajya Sabha being the Upper House has no powers to vote on make any amendments in money Bills. However the definition of "Money Bill" as provided in Article 110 of the Constitution is crystal clear. It cannot and must not include matters other than those relating to the imposition of taxes or matters related to the Consolidated Fund of India. The amendments proposed to the RBI Act, the IT Act and the RP Act clearly do not fall within this criteria. So once again the Government is trying to bulldoze amendments to other laws through legislation labelled 'money bill to prevent any actionable dissent in the Rajya Sabha. The political parties connived to a similar action in 2016 when the Foreign Contribution Act was amended to permit political parties to receive donations from Indian subsidiaries of MNCs. That proposal was also pushed through a Finance Bill. This is grave constitutional impropriety to say the very least and seems to be becoming a habit.

Is this a step forward in political party funding or a leap backward into the era of secrecy ordained by law (and not absence of a law as was the case earlier), readers may decide for themselves.

As political parties are refusing to be covered under The Right to Information Act despite a June 2013 order of the Central Information Commission, citizens will not be able to access information about political funding through that channel either. So while the regulating agencies like the IT Department and the Election Commission are deprived of their powers to make political party funding transparent, citizens will also not have any means to find out which party has collected how much money and form whom. The entire exercise of demonetisation is also not likely to help bring in any transparency in the funding of political parties.

The Finance Minister seems to have gone back on his promise that the Government would implement every word of the Hon'be Prime Minister's speech made on new year's eve, where the PM assured the country about taking the lead to clean up political party funding.