On the Brink of a Disaster, India’s Quest for Climate Justice 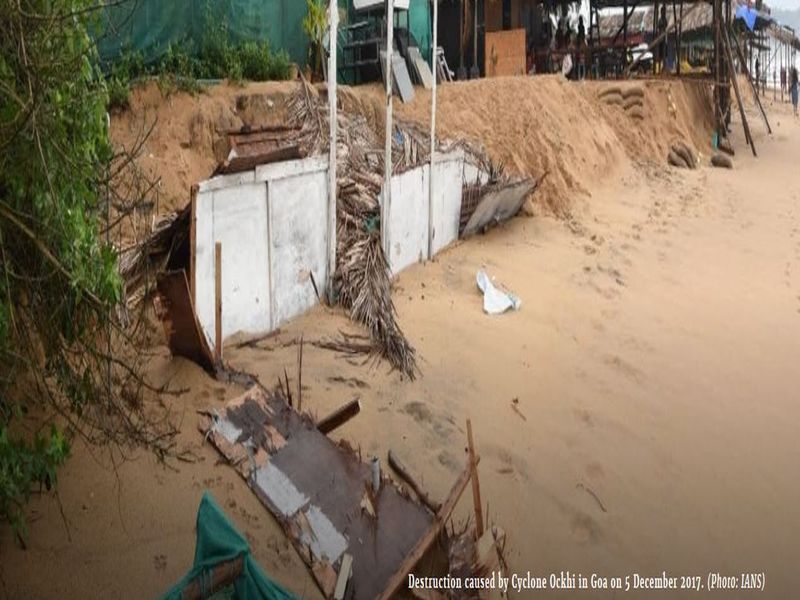 India is one of the most vulnerable countries when it comes to natural disasters. The impact of climate change is becoming exceedingly severe and warrants urgent action and dialogue on loss and damage at the international level.

Rescue and recovery work is underway, and the leadership from states have called for the cyclone to be declared as a ‘national disaster’. While the question of calling it ‘national’ can be left to politics, the issue of disasters however, remains extremely relevant.

India is facing an unprecedented shift in weather patterns.

The Global Climate Risk Index 2018, released in November, lists India as the sixth most vulnerable nation to the impact of climate change.

In 2016, global risk and strategic consulting firm Maplecroft rated India as the most exposed country to natural hazards in the world.

India battles with rapid and slow onset weather events on all fronts. The Northeast gets ravaged every year by excessive flooding and rainfall, displacing thousands, submerging villages and taking a toll on human and animal lives. On the other hand, most of the southern states, Maharashtra and Madhya Pradesh suffer from extreme drought and water scarcity. In 2016, it affected nearly 330 million people, pushing vulnerable populations to greater risk and even resulting in migration.

In the past three years, Rajasthan has witnessed record-breaking heat waves, causing 3,000 deaths, while Jharkhand has reported deaths due to cold waves. India’s coastal areas are further threatened by rising sea levels. By 2050, nearly 40 million Indians will be at risk from rising sea levels.

The famed Sundarban forests have reduced by 3.71 percent and have lost 9,990 hectares of its landmass to erosion in one decade.

People affected by disasters don’t just lose their homes and livelihood, but also their right to live with dignity and security. Communities face severe economic and health risks. Non-economic losses, such as cultural heritage and community, further aggravate the mental trauma. Climate-sensitive sectors, such as agriculture, fisheries and forestry, have been hit the hardest.

There are over 12,000 farmer suicides in India every year and many have been linked to rising temperatures.

Climate change exploits unfortunate realities in the delicate set up of a country where 67 percent of the population lives in rural areas. The poor and marginalised are most vulnerable to climate variability.

We who live in the comfort of our urban houses are oblivious to the ground realities of climate change that impacts rural communities across South Asia. In Bangladesh, heavy monsoon leads to flooding and riverbank erosion. Nepal witnesses floods and landslides regularly. In 2017, floods affected more than 40 million people and caused 1,200 deaths in these three countries.

As per ActionAid’s 2016 report, communities displaced due to such hazards, particularly in Bangladesh and Nepal, have been migrating to India. This creates hotspots of socio-economic problems that will affect the geopolitical balance of the region.

Not only do natural disasters impact women and children the most, even environmental migration is a ‘gendered process’. Women who migrate and those who stay back are equally at risk. Female migrants are prone to exploitation, as trafficking and abuse are widespread in the region.

In villages, phenomena such as ‘drought and flood widows’ have become a reality. Women are reduced to extreme poverty and ill-health, as they are required to take care of the family, manage the house and generate income, all single-handedly.

The pressure of disasters on India’s resources and resilience is only going to rise. As per the fifth assessment report of the Intergovernmental Panel on Climate Change (IPCC) in 2014, climate change will further accelerate extreme weather patterns in South Asia and increase the likelihood of irreversible impact on people and ecosystems. In these circumstances, India needs to talk about climate justice.

Coping with Loss and Damage

As developing countries have limited capacity to deal with natural hazards, loss and damage is often followed by support for the victims, including finance.

Julie-Anne Richards, global expert on climate justice explains it as:

The worst impact of climate change is on the most vulnerable people. Because we haven’t done enough mitigation and there isn’t enough finance for adaptation, we are left with impacts that we can’t adapt to anymore.

Loss and damage incurred is also about holding the rich countries to their word, and not leaving behind those who lie on the periphery of climate change. It is a politically tense subject at the international level. Developed countries having previously refused to talk about ‘compensation’ and ‘liability’, despite being the major contributors to existing levels of carbon emissions.

Developments have been slow and limited to the establishment of a technical body, the Warsaw International Mechanism (WIM), in 2013. In 2015, India estimated a broad figure of 2.5 trillion dollars as climate finance in its Intended Nationally Determined Contributions (INDC) for supporting climate change measures.

The 23rd Conference of Parties (COP) to the United Nations Framework Convention on Climate Change (UNFCCC) took place in Germany in November. Developing countries were hoping for a solution on the issue. However, there wasn’t much of an outcome – except for the announcement of an expert dialogue on loss and damage, to be held at the next meeting in May 2018. The result of this dialogue will ultimately guide a technical paper on climate finance for review in 2019.

India and other developing countries have to hold tight. In February 2018, parties to the UNFCCC will be submitting their views on the matter. It is an opportunity to set the priorities straight on achieving political consensus on loss and damage. Civil society and research institutions have to be included in the process. Focus should be on increasing finance for the ‘Adaptation Fund’ and finding ways to possibly reverse the impact of climate change.

A lot of ideas have been mooted in this regard, such as a carbon tax on the fossil and fuels industry and a levy on air and water transport systems to support loss and damage measures.

From Relief-Centric to Preparatory Approach

Apart from building the momentum, we also need to strengthen national measures to prevent and mitigate disasters. Post Gujarat earthquake in 2001, India shifted from a relief centric to a more preparatory approach which aimed to integrate disaster mitigation in the development process.

However, rapid urbanisation and climate change remain key challenges. Ironically, a multi-country report by IFRC (International Federation of Red Cross and Red Crescent Societies) and UNDP in 2014, found that disaster risk reduction was given medium priority in India’s disaster risk management law. Our National Action Plan on Climate Change launched in 2015 does not include disasters. Astonishingly, it doesn’t even mention the word.

Cyclone Ockhi has rekindled focus on India’s vulnerability, insufficient preparedness and lacklustre implementation during natural hazards. For its own interest, and in the interest of everyone else, it is time for India to bolden its position on climate justice.