No rules, SOPs for ordering preventive detentions under J&K PSA 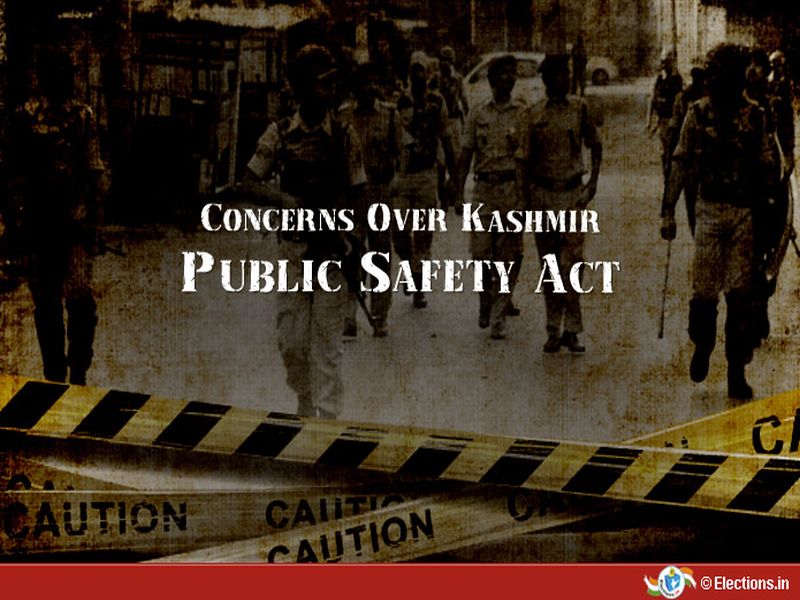 While replying to an RTI application filed by members of the J&K RTI Movement (led by Dr. Shaikh Ghulam Rasool), the J&K Home Department, has admitted that the State Government has not made any Rules or Standard Operating Procedures (SOPs) under the Jammu and Kashmir Public Safety Act, 1978 (J&KPSA) during the four decades of its existence. District Magistrates and Divisional Commissioners have been issuing hundreds and sometimes even thousands of detention orders every year, under the controversial J&KPSA, without much else to guide them except the reports and dossiers prepared by the J&K Police.

Section 23 of the J&KPSA empowers the State Government to make Rules to implement this law. It is common practice for Legislatures to delegate powers to the Executive to make Rules to provide detailed procedures for implementing the bare bone provisions of the laws they enact. Yet, by the Home Dept.'s admission, J&K Government has not invoked Section 23 to make any Rule for implementing J&KPSA even after forty years of enactment.

The RTI reply also revealed that 1,003 persons had been detained across J&K, for varying periods under this law, between March 2016 and August 2017 - a period which included several months of turmoil across J&K. The Home Department which is part of the portfolio of departments retained by the Hon'ble Chief Minister, refused to reveal the identities of the detenues, citing Section 8(1)(f) and 8(1)(g) of the J&K Right to Information Act, 2009 (J&K RTI Act). While Section 8(1)(f) exempts disclosure of information that may endanger the life or safety of a person or reveal the source of information given in confidence to law enforcement agencies, Section 8(1)(g) exempts the disclosure of information that may impede the process of investigation, prosecution or apprehension of offenders.

Members of the J&K RTI Movement and other civil society activists filed common RTI applications across all districts of J&K in June 2017 with the following queries:

"1) A clear photocopy of the latest version of the Rules framed under the J&K Public Safety Act, 1978 (J&K-PSA);

2) A clear photocopy of the Standard Operating Procedures (SOPs) that provide guidance to the District Magistrate for the purpose of making decisions regarding the detention of any person under the J&K-PSA, based on police reports/dossiers;

3) The total number of persons detained under J&K-PSA from 04 March, 2016 till date and the complete list of detenues indicating the name, age, parentage, postal address and grounds for detention and exact place of lodgement of each detenue;

4) A clear photocopy of any official document that contains the procedure for ascertaining the age of a detenue under J&K-PSA when such person is suspected to be a minor;

5) Inspection of all detention orders issued under J&K-PSA and the related police reports and dossiers related to such detenues as on date of this RTI application."

Despite the J&K Home Department's admission about the non-existence of Rules and SOPs under the J&KPSA, the districts gave contradictory and even funny replies to similar queries. Given below is a sampler of these replies:

It appears that the office of the DM Anantnag (one of the worst affected districts during the turmoil) is following a rulebook for detaining people under J&KPSA about which the J&K Home Department is also not aware. This office replied only after the RTI applicants filed a first appeal after waiting in vain for the PIO's reply for the first 30 days.

2) RTI reply from DM Srinagar: The PIO of the DM's office, Srinagar attached a copy of the complete text of the J&KPSA to his reply and advised the RTI applicants to approach the proper forum, namely Home Department for the Rules and the SOPs. (See 6th attachment below)

3) RTI reply from DM, Kulgam: The PIO of the DM's office, Kulgam attached a copy of Section 8 of the J&KPSA to his reply, indicating that these were all the Rules and SOPs that were being followed while issuing detention orders in that district. The PIO replied only after the RTI applicants filed a first appeal after waiting in vain for 30 days- the statutory deadline for the PIO to send a reply. (See 5th attachment below )

4) RTI reply from DM, Kishtwar: The PIO of the DM's office, Kishtwar also attached the text of the J&KPSA and an amendment made to this law in 2012 (which prohibits the detention of persons below the age of 18 years) to his reply and stated that they are the Rules as well. (See 4th attachment below)

5) RTI reply from District Police Budgam: The Budgam DM's office did not bother to send any reply to the RTI applicants for 30 days. After they filed the first appeal, the RTI application was transferred to the Budgam District Police, without even informing the applicants about such transfer as is required under Section 6(3) of the J&K RTI Act. The PIO (who is of Dy. Superintendent of Police rank) replied as follows:

"1. The latest version of the rules framed under the J&K Public Safety Act, does not pertain to us. It can be had from concerned government department or agency.

2. The law in this regard is clear that subjective satisfaction of the District Magistrate is required on the dossier provided to him for making detention. The mention of SOP made by you in point No. 02 is factually as wel as, (sic) legally misconceived." (See 2nd attachment below)

In other words, the Budgam District Police treated the act of even asking questions about the existence of SOPs under J&KPSA as an affront to their power and authority. This is another indicator of the deep levels of impunity that exist within the administration armed with extremely harsh laws like the J&KPSA. Home Departments and Police Headquarters in other States issue SOPs on a range of operational matters such as registering FIRs, investigating crimes, handling cases of sexual assault against women and children, providing them counselling services, handling complaints of atrocities against dalits and adivasis etc. SOPs are issued in order to provide detailed procedures for implementing statutory provisions or rulings of High Courts and the Supreme Court on specific matters. This is common practice across other States.

No detention of minors under J&KPSA claim public authorities

The Home Dept. replied that no minors were being detained under J&KPSA. The certificate of date of birth issued by the competent authority was treated as proof of age. Similar replies were sent by the PIOs of other DM offices who bothered to respond to the RTI applications. No SOPs seem to have been issued on this subject either, especially when a detenue suspected to be a juvenile is unable to furnish proof of age.

Lack of responses from several districts and unreasonable orders of the PIO & FAA of the Home Dept:

Several districts have not bothered to send replies even after first appeals were filed. Second appeals are being filed against them to the State Information Commission.

The Home Department rejected an RTI application for information about Rules and SOPs under J&KPSA sent to them directly on the ground that the IPO was left blank. According to Section 5(3) of the J&K RTI Act a PIO is required to provide reasonable assistance to an RTI applicant which includes curing any technical defects in the RTI application. According to Section 7(1) of the RTI Act, a request for information may be rejected only by invoking the exemptions listed in Sections 8 or 9 of the J&K RTI Act. Despite the applicants pointing out this requirement in their first appeal, the First Appellate Authority of the Home Department upheld the PIO's decision to reject the RTI application. More than 60 days have passed since the submission of the second appeal. The J&K State Information Commission has not yet fixed a date for hearing this matter (see RTI applications, replies and appeals in the 7th attachment below)

Grounds for detaining any person under J&KPSA

Many residents of J&K believe that the State Government enacted J&KPSA during the late 1970s, in order to tackle timber smuggling, so this law does not affect common citizens much. Nothing can be farther from the truth. J&KPSA is not a substantive criminal law like the Ranbir Penal Code, Svt. 1989 which recognises specific criminal offences. Instead J&KPSA is a law that empowers the administration to detain a person in order to prevent him or her from committing certain specific actions. According to Section 8 of J&KPSA, a District Magistrate or a Divisional Commissioner may detain any person in order to:

i) prevent him or her from acting in a manner that may be prejudicial to the security of the State or the maintenance of public order;

ii) if a person is a foreigner as defined in the Foreigners Act, 1946, including a person residing in the area of the State occupied by Pakistan in order to regulate such person's continued presence in the State or in order to make arrangements for his or her expulsion from the State.

According to the J&KPSA, the following acts inter alia will be considered "prejudicial to the maintenance of public order":- promoting or attempting to create enmity or hatred on grounds of religion, race, caste, community or region, use of force or making preparations for using force to provoke or abet or disturb public order or commit, instigate or incite mischief as defined under Section 425 of the Ranbir Penal Code, commit or attempt to commit or instigate or incite or provoke an offence punishable with death or life imprisonment, or an offence inviting punishment of a jail term of seven years or more where the commission of such an offence disturbs or is likely to disturb public order.

Timber smuggling and abetting such smuggling and other related acts were added as grounds for detention under J&KPSA, seven years later, in 1985. Under the J&KPSA, a person may be locked away for a period of up to two years on any of the grounds listed above, without the right to be produced before a Judicial Magistrate or hire a lawyer to defend oneself. In recent years, the Government itself issues such orders and confirms them despite the law requiring every such detention order to be place before a 3-member Advisory Board for confirmation. In 2011, Amnesty International published a detailed study highlighting the serious human rights violations that had occurred in hundreds of cases of preventive detentions made under J&KPSA.

Motivation for the RTI interventions

Deeply concerned by rampant use of J&KPSA in 2016 (during the turmoil), J&K RTI Movement invited Commonwealth Human Rights Initiative (CHRI) to conduct sensitisation sessions for civil society activists, lawyers, law students and media-persons on the provisions of the J&KPSA and other related police procedures. After understanding the statutory provisions and their human rights implications, they decided to submit RTI applications across all districts in order to document evidence based on official records about the manner of implementation of J&KPSA. Venkatesh Nayak and Shikha Chhibbar of CHRI conducted the sensitisation sessions and provided technical assistance to the group on the RTI procedures. In order to prevent possible harassment by the administration all RTI applications were filed in groups taking advantage of a 2012 judgement from the Punjab and Haryana High Court which permits such group action in solidarity [Ved Prakash & Ors. vs State of Haryana & Ors, (2012) 168 PLR 741]