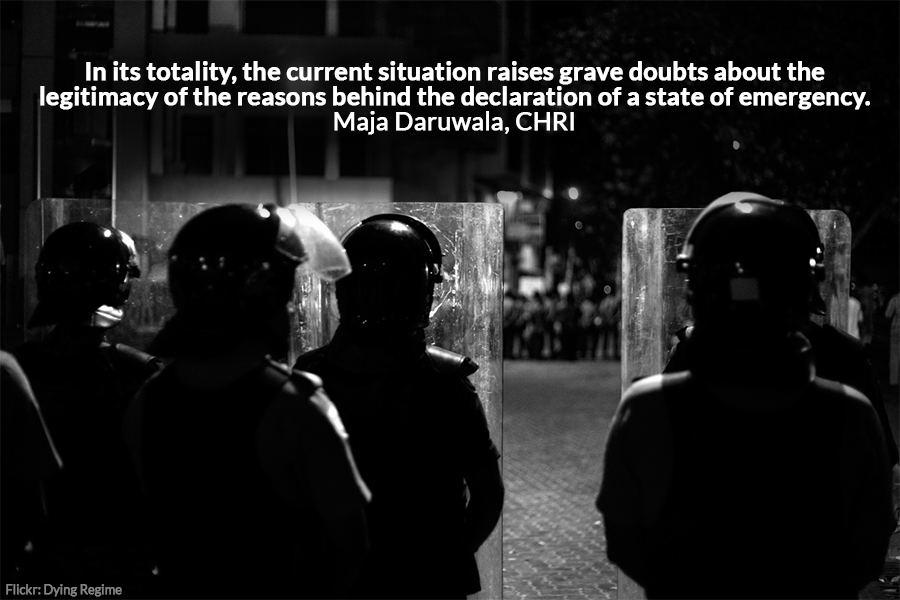 The Commonwealth Human Rights Initiative (CHRI) notes with deep concern the declaration of a state of emergency in the Maldives. We condemn the curbs on freedom from restraint, right to privacy, right to strike, freedom of assembly, freedom of movement, freedom from unlawful arrest, detention and imprisonment; and freedom from search and seizure without unreasonable cause. CHRI joins the Commonwealth and its member states who have questioned the necessity of a state of emergency and called for its immediate lifting.

A state of emergency is an extreme measure resorted to in exceptional circumstances. Article 4 of the International Covenant on Civil and Political Rights lays down the threshold as a “public emergency which threatens the life of the nation”. CHRI seriously questions whether the current situation meets the international law threshold, and holds that the nationwide declaration is disproportionate to the alleged threats. The Presidential decree justifies the emergency on the ground of a “serious threat to the people and to national security” with references to the recovery of arms and ammunitions from two locations, the explosion on the Presidential speedboat, and “definitive information of plans by some [our emphasis] individuals to use these explosives and weapons”. We note that these threats are specific, limited in nature, and can be addressed without resort to measures that affect the entire population across all islands of the archipelago, and rights and liberties of the entire population.

The circumstances also support reasons for strong doubt. The declaration of emergency came two days before a mass protest rally against “unjust and autocratic rule” was to take place today, 6th November. There have also been demands for the immediate release of all political prisoners including party leader and former president Mohamed Nasheed, following the UN Working Group on Arbitrary Detention decision that his imprisonment is unlawful.

On November 5, in an abrupt vote, the People’s Majlis impeached the Vice President amidst accusations about lack of due process, deepening the political crisis. Vice President Ahmed Adeeb was arrested on suspicion of being behind the presidential speedboat explosion on 24 October. As part of the declaration of the state of emergency, the period given to the Vice President to prepare for a Majlis hearing on his removal was reduced from fourteen to seven days – a move entirely unrelated to threats justifying the state of emergency. His right to a fair trial has been further jeopardised by the Supreme Court suspending his lawyer Hussain Shameem and temporarily revoking his license. This bears unhappy resemblance to former President Nasheed’s controversial trial and imprisonment.

Media reports also point that Maldives Broadcasting Corporation has warned private television stations that broadcasting licenses will be suspended if they air content deemed to pose a threat to national security. This not only attacks the freedom of the press, but also is an illegal attempt to limit freedom of expression which specifically is excluded from restriction even in times of emergency as per Article 255(b) of the Constitution.

Maja Daruwala, the Director of CHRI, states, “In its totality, the current situation raises grave doubts about the legitimacy of the reasons behind the declaration of a state of emergency. This can easily give rise to long lasting political alienation and widespread social unrest. The circumstances ground no justification for a blanket injunction on the enjoyment of many of civil liberties, rights and freedoms. CHRI fears that state agencies may use sweeping powers of arrest to stifle all legitimate expression and dissent and lead as it has in the past to excess use of force with impunity built in”.