CHRI and partners convene conference for Commonwealth Parliamentarians in London 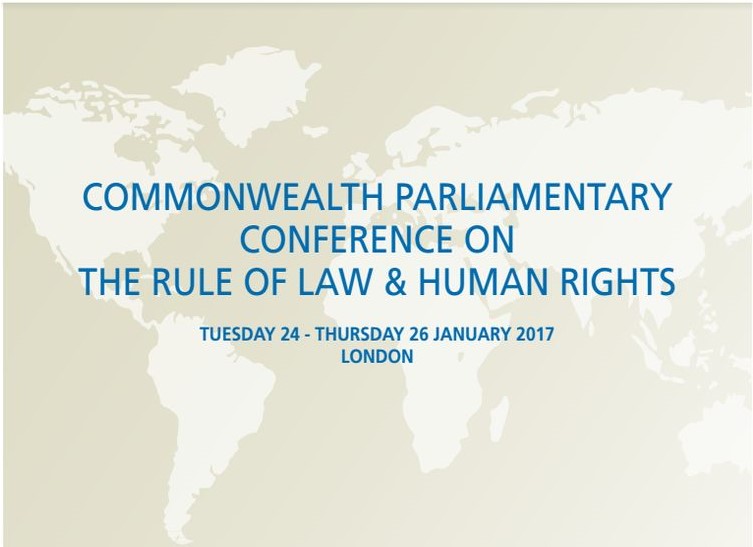 The Conference was held in London over three days, from 24th to the 26th of January 2017. The first day was hosted at Marlborough House, and the second and third at the Palace of Westminster. The objectives of the conference were:

The conference was opened by Commonwealth Secretary-General, Patricia Scotland QC and Harriet Harman, Chair of the UK’s Joint Committee on Human Rights. Scotland emphasised the opportunity for the parliamentarians to work together to address human rights issues facing people around the world, while Harman focused on the essential role of parliamentarians in holding government to account. The opening of the conference.

Day 1 focused on the role of parliaments in producing human rights legislation and treaty implementation.

There followed a session on how parliamentarians can address human rights issues. This session was chaired by Friends of CHRI Patron, Baroness Vivien Stern, and Agostinho Neto, of the Kenya National Assembly, and included break-out sessions on the topics of Women's Rights and Equality, Access to Justice, and Poverty, facilitated by CHRI London Chair Sophie Rigney, CHRI London trustee Sadakat Kadri, and ComSec’s Justin Petit.

After lunch Baroness Prashar, and Lord Fusitu'a of Tonga, and Murray Hunt, Legal Adviser to the UK’s JCHR led a session on the role of Human Rights Committees.

The final session of the day focused on the role of parliaments in complying with its obligations towards implementing treaties.

Day 1 closed with a reception hosted by Baroness Anelay of St Johns DBE, UK Minister of State for the Commonwealth and and Dr Josephine Ojiambo, ComSec’s Deputy Secretary-General for Political Affairs. CHRI was delighted to invite members of the Commonwealth Equality Network, Modern Slavery advocates, and Friends of CHRI based in London.

The theme of day 2 focused on developing and relationships with the executive, and other parliamentary committees. Following this session, delegates were split into small groups to share experience and good practice.

Following lunch, Robert McCorquodale of the British Institute of International and Comparative Law, about Business and Human Rights spoke, and there was then a chance to attend a JCRH hearing on Modern Slavery.

To conclude the day delegates split into regional groups to facilitate networking and sharing of good practice.

Day 3 commenced with a breakfast meeting for Chairs of Committee to agree the final conference Communiqué, facilitated by CHRI London Chair Sophie Rigney, and Justin Pettit of ComSec.

The first full session of the morning was chaired by Fiona Mactaggart MP, Chair of UK’s Human Trafficking APPG and Sarah Newton MP, who gave an overview of modern slavery as a key human rights issue.

There followed a mock committee hearing on human trafficking, with Katherine Bryant, Research Manager at the Walk Free Foundation and a senior UK police officer being questioned by conference participants.

In the final session, delegates used the evidence gathered in discussions with representatives from organisations from Unseen, and Human Trafficking Foundation.

The conference came to a close with lunch at the Speaker’s House. Malaysian MP, Kasthuri Patto gave the final address with a passionate encouragement to parliamentarians to be “agents for change” in their countries in order to protect and promote human rights.