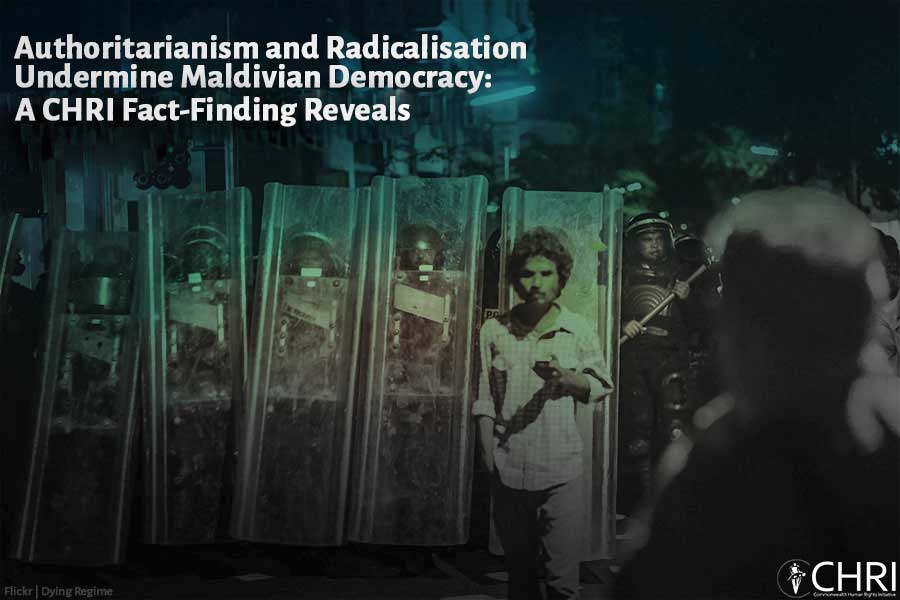 By Uladzimir Dzenisevich and Kai Reddy

Prompted by alarming reports of human rights violations, threats to democracy and the rule of law in the Maldives, the Commonwealth Human Rights Initiative (CHRI) commissioned an independent fact-finding mission to the Maldives in November 2015 and will release its final report tomorrow. The mission’s objective was to evaluate Maldivian compliance with the Commonwealth’s fundamental values laid out primarily in the 2013 Charter and the Latimer House Principles as well as international standards.

A diverse and expert team was constituted for this fact-finding mission, including Mr. Satyabrata Pal, a former member of the Indian National Human Rights Commission, Ms. Kishali Pinto-Jayawardena and Mr. Asad Jamal, both prominent legal practitioners from Sri Lanka and Pakistan respectively, and Mr. Uladzimir Dzenisevich from CHRI.

The intelligence collected echoes the Commonwealth’s and the international community’s concerns regarding the Maldives. The republic is in clear violation of the fundamental values of the Commonwealth in addition to numerous international agreements, including the International Covenant on Civil and Political Rights (ICCPR), the Convention against Torture (CAT), and the Convention on the Elimination of All Forms of Discrimination against Women (CEDAW), to which the Maldives is a party.

In particular we found that a gradual but sure slide to authoritarianism accompanied by a flagrant disregard to rule of law, good governance and human rights is taking place in the Maldives. These problems are further exacerbated by the rise of radicalised non-state actors relentlessly harassing those perceived to be secular, unorthodox or “un-Islamic”. With a government unwilling to punish these perpetrators and instead tolerating them, Maldivian society is being moved along paths that seriously threaten democratic and Commonwealth values.  Government policies are disenfranchising and, in some cases, jeopardising political opposition, endangering the functioning of human rights organisations, activists and journalists, and fast narrowing the space for free expression.

The growing authoritarianism of the ruling party prevents the separation of powers and threatens democratic culture and practices in general. The Executive is headed by President Abdulla Yameen, whose Progressive Party of Maldives (PPM) holds the majority in Parliament. Since 2013, the PPM-dominated Parliament has passed a number of restrictive, and often oppressive, laws and measures. This includes the widely condemned Anti-Terrorism Act, a reintroduction of the death penalty after a 60-year long moritorium, limitation of prisoners’ political rights and a number of legislative efforts curtailing the freedom of expression.  More is on the way.  For instance, calls to boycott the tourism industry, or to sanction the Maldivian government, can lead to imprisonment and heavy fines under a pending bill.

The Parliament has also refrained from action or comment on increasing harassment and physical attacks on activists, journalists and opposition members. Several of those the mission interviewed suggest that the ruling party promotes the silencing of dissent both within and outside the Parliament’s walls.

The PPM’s tenure has also been marked by a series of abrupt and arbitrary dismissals of state officials and interference with independent constitutional bodies and the judiciary. Most notably, in December 2014 two Supreme Court judges were hastily removed by Parliament following the amendment of the Judicature Act. While the independence of the Maldivian judiciary is being seriously challenged, the country’s Supreme Court, ironically, has taken actions that interfere with the political process in the country, and consolidate unchecked control over the lower judiciary and regulation of the legal profession. The Supreme Court has also intervened in the electoral process, initiated several contempt of court proceedings that target independent institutions, and undermined the right to a fair trial by violating due process in several cases and severely limited appeal periods.   Further, it has assumed the Attorney General’s power to license lawyers.  As a consequence, the entire judicial system is widely regarded as acutely politicised and unaccountable to the public. The impartiality and independence of Maldivian courts is also questioned.  These views are supported by international critics of the Maldives.

The judiciary’s incapacity to strongly resist authoritarian pressure is partly to blame for the large number of political prisoners. While the government denies the existence of political prisoners, many high profile political figures have been recognised as such across the globe. The European Parliament resolution of 17 December 2015, which expressed “deep concern about the gradual deterioration of democratic standards” in the Maldives, refers to former president Mohamed Nasheed, former vice-president Ahmed Adeeb and former defence ministers Tholhath Ibrahim and Mohamed Nazim, together with Sheikh Imran Abdulla and “other political prisoners”. The political opposition in the Maldives identifies more than 1700 individuals as convicted, detained or charged on political grounds, often just for participating in protests.

The shift to authoritarianism has made constitutionally mandated institutions, including the Anti-Corruption Commission, Human Rights Commission of the Maldives, National Integrity Commission and Election Commission vulnerable.  The team learnt that the government has targeted and succeeded in undermining the independence, impartiality and accountability of these institutions, affecting their credibility and making it hard for them to fulfil their mandates.  Questionable appointments, judicial interventions, conditional real estate gifts that may be called bribes, as well as marginalising and ostracising dissenting members of the said bodies, were strong examples of external pressure and interference.

The geopolitical shift of the Maldives to Middle Eastern spheres of influence have been demonstrated by indications that the government is embracing a new identity for the country, with Wahhabi and Salafist ideologies dominating the religious discourse. Recent incidents reveal that this is being used as a cloak to target political opposition and other dissenters by labelling them “un-Islamic”. This rhetoric played a pivotal role in the ouster of former President Nasheed and continues to gain prominence today.

Such labels carry a real threat because non-state networks which subscribe to these views are increasingly seen as the perpetrators of harassment and attacks on opposition members, activists and journalists. While there are no known jihadist organisations within the Maldives, the country provides fertile ground for terrorist recruitment from among local sympathisers of these violent ideologies. In an island country of 345,000 people scattered over 26 atolls, it is estimated that more than 200 Maldivians travelled to Syria to join various fighting factions, including the Islamic State in Syria (ISIS) and Al-Nusra Front. Local newspapers frequently report new departures and casualties among Maldivian fighters abroad. This bolsters the argument that the Maldivian government does not do enough to prevent its citizens from leaving for Syria and Iraq.

Though the onset of radicalisation predates the current administration, it is criticised for denying that the problem exists, for not doing enough to counter it and, in fact, for giving the radicals leeway to operate. Critics point out that there is neither a legal framework nor a policy to prevent and counter radicalisation or to deal with terrorism. The Anti-Terrorism Act, 2015 is universally seen and condemned as merely a tool to target anyone opposed to the government. They argue that police indifference and inaction in dealing with harassment and attacks on moderates reflects government policy. Tellingly, in a small society, where much is shared and must be taken as well-grounded fact, the police themselves are seen as among the most radicalised institutions in the country.
Independent institutions responsible for overseeing the police were equally unresponsive to the complaints against police inaction in these cases. Their complaint mechanisms have been pointed out as being so inefficient that targeted individuals have stopped reporting regular death threats to the police.

Unwillingness on the part of the police and political establishment to tackle radicalisation was exemplified by the 300-strong march of ISIS supporters that took place on 5 September, 2014. The participants waved ISIS flags, chanted slogans against democracy and secularism and prayed for the success of “mujahedeen” fighting in the wars abroad. The event caused a huge media outcry, but reportedly no arrests were made.

Deteriorating rights and access to opportunity for women should also be considered in assessing Maldivian adherence to Commonwealth values and international law. The near-sponsorship of ultra-conservative values and the tolerance afforded to groups that openly espouse violence is a sure pre-cursor to increasingly curbing rights and opportunities women have enjoyed in the Maldives. There has been an increase in the use of flogging – a corporal punishment that disproportionately targets women – as well as degradation of women’s rights including freedom of expression, freedom of movement and right to education.

We believe that the empathy afforded to radicalised elements by an authoritarian government will both dismantle democracy and mould Maldivian society according to values and beliefs that stand in stark contradiction to the core values and principles of the Commonwealth.

The forces of authoritarianism and radicalisation have had a significant impact on Maldivian society.  These include, but are not limited to:
1.    An increase in human rights violations committed with impunity.
2.    A shrinking space for civil society, the opposition and independent media to operate.
3.    The degradation of constitutionalism and the rule of law.
4.    The decay of good governance and independent institutions in particular.
5.    Inappropriate judicial overreach and interventionism.
6.    Politically motivated criminal charges and imprisonment.
7.    An adverse effect on gender equality and women’s rights.
8.    Increasing police harassment and violence.

What can be done?

It is highly unlikely that the government will take steps to reverse the dynamics of radicalisation and authoritarianism without losing its grip on power. The lack of political will within the current Maldivian government to tackle these issues makes international pressure even more necessary to push for reforms in the country. In a nutshell, the reforms become possible when the costs of resistance to international pressure begin to outweigh their benefits. This approach has proven to be effective.  As examine in an earlier CHRI blog, last month former President Nasheed was granted a medical reprieve in the UK, following mounting international pressure and calls for sanctions and a tourism boycott.

To make the Maldives government respect Commonwealth values and comply with its obligations under international law, the international community and the Commonwealth should consider further efforts in applying pressure on the PPM government. In particular, release of all political prisoners should be high on the agenda, but it must be accompanied by a thorough investigation into the abuse of power, human rights violations and threats to democracy. Furthermore, the Maldives should be kept under scrutiny until the time the government re-establishes the rule of law, properly exercises democratic values, and ensures the separation of the Executive, Judiciary and Legislature in keeping with Commonwealth values. Failing which, the Maldives must be suspended from the Commonwealth. The country’s reinstatement should only be considered when the state demonstrates a return to these values.